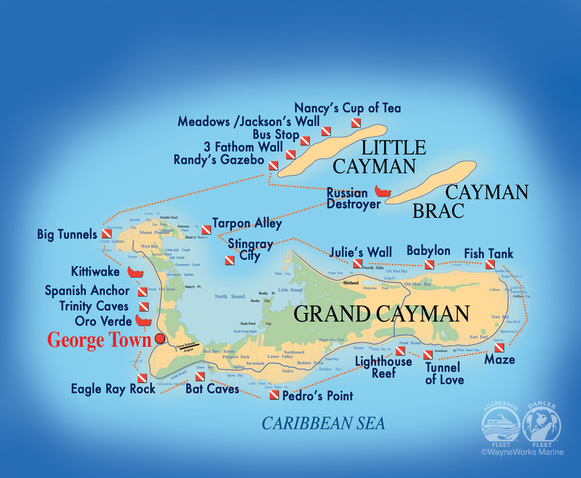 Now for the goods on the pride of Cayman live-aboards. First the ocean ambience. The water is delightfully warm. Visibility is 150 feet plus. You just swam past a barrel sponge so large you could hide inside. This sounds like a dream dive, but if you are in the Cayman Islands, it's actually pretty typical. Cayman offers some of the most spectacular wall & wreck dives in the Caribbean. The best way to experience Cayman's underwater beauty to the fullest is through a dive vacation aboard the new Cayman Aggressor IV. Completed in October 1998, the 110-foot, 18-passenger floating dive resort offers her guests the finest on- board accommodations & service in the Cayman Islands.  With features such as spacious staterooms with en-suite baths, an on board computer station with internet access, & a sprawling sun deck with hot tub, the Cayman Aggressor IV just may be the finest live-aboard afloat. And, after a week aboard you will agree.

If you arrive on Saturday, a crew member will greet you at the Georgetown airport & drive you to the boat. Guests may board the Cayman Aggressor IV Saturday afternoon after 2:00 p.m., unpack, relax & enjoy a delicious dinner served by the onboard chef. Sunday morning the Aggressor moves to the first of many excellent dives sites.

Throughout the week, the Cayman Aggressor IV explores Grand Cayman's best dive sites including the wreck of the Oro Verde, Bonnie's Arch & Babylon. Weather permitting, the Aggressor makes an overnight journey to Little Cayman. Here guests dive famous Bloody Wall, a magnificent, sheer wall starting in only 16 feet of water! Man, this Bloody Bay Wall is a Bloody Bay ball! You will be talking about Bloody Bay Walls for years to come, believe us. After a day or two at Little Cayman, weather permitting, the Aggressor speeds to Cayman Brac for one of the most thrilling wreck dives in the Caribbean, the Capt. Keith Tibbetts, a 330-foot Russian Destroyer. The week culminates with dives at Grand Cayman's Tarpon Alley & world-famous Stingray City. What can we say about Stingray City that has not been said in the National Geographic cover story, & scores of dive magazine articles since the earth cooled? " Stingray City, Stingray City, Stingray City, " doesn't it remind you of some fun woody + guarachis Beach Boys ditty from the mid-60s? This is one of the best single scuba diving adventure on the itinerary, folks.

Some of the marine life aficionados may encounter throughout the week include barracuda, turtles, eagle rays, reef sharks, grouper, stingrays, eels & tarpon. You may want to capture some of Cayman's splendor on film with one of the onboard rental cameras. There is a full line of rental underwater camera equipment & dive gear available throughout the week, as well as certification & specialty courses.

Friday afternoon, the Cayman Aggressor IV returns to Georgetown Harbor. Guests may spend the afternoon sight seeing or just relaxing onboard until the evening cocktail party hosted by the crew. After the party, everyone will dine at a local restaurant. This is the only meal not included in the charter. Check-out is 8:00 a.m Saturday morning. If you are flying out Saturday morning, the crew will arrange your transportation to the Grand Cayman airport.

Oro Verde:
The 184-foot ship lies in 50 feet of water against an abundant reef. Many grouper, jacks, snapper, eels & juvenile fish around & inside the wreck. One of many Cayman diving classics.

Trinity Caves:
Trinity is comprised of 4 narrow coral canyons starting at 40 feet meandering out to 90 feet where they spill out over the edge of the wall. You'll find black coral trees, black gorgonians, & colorful sponges.

Spanish Anchor:
The main attraction here is an eight foot anchor resting at 40 feet. Grey & French angel fish will guide you to the anchor.

Big Tunnels:
An impressive drop-off that has a giant coral arch 30-40 feet in diameter. The archway is covered with sponges & black gorgonian fans. Another fun Cayman diving classic.

Bonnie's Arch:
A sandy ravine from the mooring line will lead you to this
beautiful, fragile arch. Several huge barrel sponges, some 8 feet in diameter, are located in this area. Find the crocodile statue beneath the wall. Tarpon, file fish, angel fish & trigger fish reside near the arch.

Stingray City:
A swarm of friendly Southern Stingrays will beg for food like trained pets in this famous diving spectacle. The dive master attracts the rays with a piece of squid & the tame rays do the rest. This comical dive takes place in 12 feet of water. This wonderful dive is the great grandaddy of Cayman diving classics, bar none!

Balboa:
The crew of the Cayman Aggressor IV claim this wreck is the best night dive in the Caribbean. After the dive, you'll probably agree. Dynamited apart & sunk in 30 feet of water in 1932, the Balboa's remains have collected an array of marine life. Search for orange ball anemones, eels, spider crabs, octopus, sleeping parrot fish & even flaming scallops.

Eagle Ray Rock:
It is noted for eagle rays that roam the sandy flats in between the huge coral formations on the vertical wall which has beautiful elephant ear sponges, gorgonians, & black coral trees. Oh my, yet another Cayman diving gem, folks!

Lighthouse Reef:
There are many caves that open up on this vertical wall. Large turtles are seen cruising along the wall. Part of the wall is undercut with tunnels going through it. How can this be, yet another Cayman diving mundo-classico, baby!

Ironshore Garden:
This shallow dive offers hundreds of coral caverns for exploration. Silver sides & lots of reef dwellers. It is also famous for the elk horn coral that rises up from the depths to the surface. Cayman diving gets better & better by the day, sunseekers!

Nancy's Cup of Tea:
This is a group of large coral heads clinging to the wall.
Look for a huge pinnacle jutting up from the top of the wall. Keep an eye out for
an occasional shark in the lower depths.

Eagle Ray Roundup:
The sandy sea floor is at 30 feet & 40 feet near the wall. Coral heads rise up to 15 feet. A mini wall is full of marine life for non-divers. Look for garden eels on the west side & eagle rays in the open water. What a Cayman diving jewel this is!

3 Fathom Wall:
The wall is very steep & full of narrow canyons & coral. The wall lip lies at 18 feet & then disappears into the blue. The sand plain on top of the wall is teeming with fish-schools of yellowtail snapper, horse-eye jacks, barracuda, yellow-headed jaw fish & a bright yellow coney or two. A large sand chute splits the wall. On the east side of the chute there are canyons & a cave which leads up to the sandy plain. The coral is magnificent, yellow & orange tubes, red cup sponges, red finger sponges, orange elephant ear sponges & more. Now here's a Cayman diving challenge of lovely proportions.

Randy's Gazebo:
Behind a pinnacle there is a wide opening to a vertical chimney. The chimney exit is at a depth of 80 feet. Swimming east across the base of the wall you'll discover a deep canyon with a beautiful coral arch. The arch is covered with sea feathers, basket sponges, yellowtube sponges & more.

Lea Lea's Lookout:
Giant coral tunnels spiral through the wall exit at about 110 feet in a sea of plate coral & black coral.

Russian Destroyer:
The 356, now renamed Capt. Keith Tibbets, is a scuttled 330' Russian Brigadier Frigate. (The Cayman Aggressor actually held her in place as the hull filled with water.) The fore & aft cannons, machine gun turrets & missile launcher all remain intact. Snorkelers can easily view the wreck because the command tower lies only 18 feet beneath the surface. The wreck lies on a sandy bottom a short distance from the shore. Barracuda, French angels, yellowtail snapper & juvenile fish call the wreck home.  But it's kind of hard to understand fish speaking, so you have to take our word for this. The Russian Destroyer is another must-see Cayman diving classic, amigos!