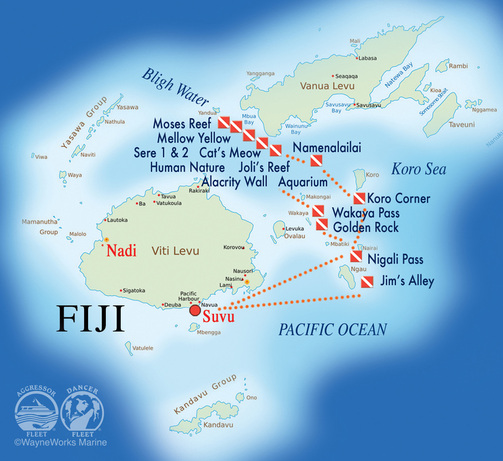 Jim's Alley:   Consists of 3 large bommies that start at about 15 feet from the surface & drop to the floor at about 60 to 70 feet. The bommies are covered in soft & hard corals, sea fans, whips & anemones. This sight also frequently has white tips, turtles, barracudas & an occasional ray. A Fiji live-aboard classic.

Ningali Pass:   Ningali pass is a small cut in the reef that can only be dove 1 1/2 hours before low water to 1 1/2 hours after low water, otherwise the visibility is poor & the current can exceed 4 knots. At this sight we see large grouper/jew fish, barracuda, big eyed jacks, snapper, big gray reef sharks & an occasional sea snake. We also have seen eagle rays, mantas & hammerhead sharks.

Wakaya Pass:   This site starts at about 35 ft. with a sandy bottom then you swim out over a wall & turn to the left. As you come over the drop off of the wall you can look straight down to about 140 ft. While swimming along the wall you may see blue ribbon eels, White tip, Nurse, & Hammerhead sharks along with Mantas, Marble Rays, Turtles, Eagle rays & Barracudas. Yet another Fiji live-aboard classic!

Golden Rock:   A bommie that starts at 35 ft. on the high inside edge it then comes up to 10 ft. & is 20 ft. across. This site has soft coral, hard coral, cleaner shrimp, blue ribbon eels, lionfish, & most important it is a cleaning station for mantas & we see mantas here 90% of the time.

Gem Stone:   Gem Stone is on the outside edge of Wakaya passage. This is a wall dive with swim throughs, hard & soft corals & as one guests who has dove around the world said, this sight is as good as they have in the Red Sea. Mantas also frequently visit this location along with hammer head & white tips sharks.  When diving this location on a night dive the light fish here are very abundant & make for a great light show. Yet another Fiji live-aboard highlight, sunseekers!

Sand Point:   Sand point is a wall dive between the island of Wakaya & Mokongi. On this dive we frequently see mantas, eagles rays, turtles, white tips & the various colorful fish of the South Pacific in abundance along with hard & soft corals.

At the turn of the century Makongi Island was the home of the last leper colony in Fiji but today its the home of the Fijian turtle & clam farm. The north end of the island is protected by a barrier reef which has a lot of great dive sights. The foremost popular are White rock, Rustic arch, coral garden & Makongi channel. Each of these sights has wide variety of bright indigenous little fish. This Fiji live-aboard dive site is a must-see.

White Rock:   White Rock is at the entrance of Makongi channel & aptly called because the waves always break on it causing the reef to have a white cap. This sight has white tips, occasionally eagle rays & mantas, eels, large file fish, an abundance of hard & soft corals but most of all it has the friendliest school of fuseliers you can imagine.

Coral Gardens:   A classic of Fiji diving, this series of bommies that have a beautiful supply of hard & soft corals. This sight also has turtles, white tips sharks, moray eels, lion fish & once in a while a nurse shark. Visibility can sometimes be below 40 feet because of heavy plankton. Another Fiji live-aboard must-see.

Makongi Channel:   Makongi channel is most often a drift dive due to the fact its at an entrance to the inner reef. On an incoming tide the visibility is quite good &  sometimes exceeds 100 feet. The usual party of Makongi sea life abounds here in the channel as well. This is Fiji scuba diving satori, diver-san.

E-6 & Hi-8:    These two sites are aptly named: "E-6" for the amount of film shot at this site & likewise "Hi-8" for the amount of video footage taken. Most South Pacific live-aboards would love to have a site this classic to give their preferred clients. Both E-6 & Hi-8 are pinnacles that start at a depth of 3,000 feet & rise to the surface. E-6 has a horseshoe-shaped grotto which is filled with anemones, large clams, lionfish & spectacular red sea fans & soft corals. Each has a virtual scuba diving smorgasbord of soft corals, hard corals, sea fans, sea anemones, octicoral, swim-throughs & are teeming with smaller fishes of the South Pacific. Included at both sights are sweet lips, hammerheads, white tips, occasional silver tips -- & if we're really lucky a whale.

The Namena barrier reef stretches a distance of over 10 miles. There is an abundance of scuba diving sites here but many are unprotected in open waters & can't be dove in bad weather. Most of these sites have the possibility of high currents & as a result the sea life here is abundant & very active. It is not uncommon to see gray reefs, white tips, silver tips, barracuda & dog tooth tuna on a 30 minute dive. The following are the most popular scuba diving sites.

Chimneys:   Three slender bommies which start at about 74 feet & come to within 10 feet of the surface. On the sandy bottom you'll find a field of garden eels with gobies & shrimp scattered throughout. Everywhere in the bommies of this site you can find pipe fish, cleaner fish, nudibranches, soft corals, hard corals, sea anemones with clown fish, & free swimming in the current above the bommies are unicorn fish & anthiest. Between the bommies in midwater are resident barracudas & it's not uncommon to see white tips or grey reefs. Wow, the Fiji live-aboard dive sites never end, amigos.

Magic Mound:   This scuba diving site is a single bommie 80 to 100 feet long & 30 to 40 feet wide. It starts at 80 feet on one side & comes up to within 15 feet of the surface. Its covered in hard corals, soft corals, sea anemones, sea fans & lots of lionfish lurking in between or hanging around under ledges. This sight is also known for its white tips & grey reef action.

North Save-a-Tack:   On an incoming tide the action is fast & furious. A diver must descend to a depth of 70 feet in water that often has a visibility of over 150 feet. On the bottom a diver may see grey reefs, white tips, barracudas & dog tooth tuna with an occasional silver tip without even moving. The current is strong & during an incoming tide & the visibility is excellent. Divers normally start on the east side of North Save-a-tack & end their dive on the west side among the hard & soft coral covered bommies. This side is excellent for macro & wide angle shots.

Black Rock Caverns:   In the mouth of Dere Bay & the host of many swim-throughs, caverns & caves. This is also one of our favorite night dive sites that is the host to large file fish, many decorator crab, white tips, flashlight fish, eels & occasionally squid. This site also has a large school of barracuda. It is in the lee of the island of Koro & can be dived almost any time during the year but visibility is usually limited to 60 feet.

Koro Gardens:   Koro Gardens is marked by a single large bommie that comes to within 15 feet of the surface. The area around the bommie is about 45 feet to the bottom & drops off to 95 feet in some areas. Hard corals cover everything while an abundance of reef fish crowd the waters & make the scuba diving spectacular. Still another Fiji live-aboard gem!

Shark Fin Point:   This site on the north east point of Koro Island can be action central. On most dives you will see a large school of about 500 barracudas, eagle rays, many white tip, lots of grey reefs, lobster, eels, & we have even seen whale shark here, yes we really have. Not only are the fish & shark abundant but it's covered in both hard & soft corals. When the tide is running this can be a most enjoyable drift dive because little effort is needed to move & its seems as if the show just swims by you. Few South Pacific live-aboards offer experiences as vivid as this locale.