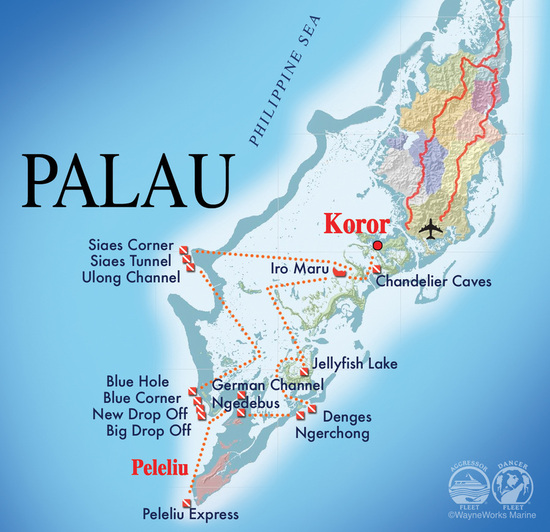 OVERVIEW of ROCK ISLAND AGGRESSOR’s SAILING SCHEDULES:
"One of the Seven Underwater Wonders of the World" is a lofty title for a dive destination to live up to, but Palau does it effortlessly. The 343 islands of Palau offer some of the most exciting & diverse diving in the world-wrecks, walls, thrilling high-speed drift dives, blue holes, even an underwater cave. How can a diver explore it all in just a week? It's simple. Take a seven-day cruise on the luxurious 16-passenger, 106-foot power catamaran, Rock Island Aggressor.

If you arrive in Palau on Sunday morning, an Aggressor representative will greet you at the Palau Airport & drive you to the Palau Pacific Resort. At II crew member will drive guests from the hotel to the Aggressor. Guests board the Rock Island Aggressor that afternoon, then unpack, relax & enjoy a delicious dinner served by the on-board chef. Monday morning, the Aggressor moves to the first of many excellent dives sites.

Throughout the week, the Rock Island Aggressor traverses the green mushroom-shaped rock islands of Palau, exploring the finest dive sites including German Channel, Blue Holes & the Wreck of the Iro Maru. At Blue Corner, divers are treated to one of the most spectacular shows in diving-a cleaning station for sharks. The week culminates with a spelunking excursion into Chandelier Caves, a beautiful three-chambered cave. Some of the marine life divers may encounter include schooling barracuda, mantas, Napoleon wrasses, dog-tooth tuna, lionfish, cuttlefish, & grey reef & white tip sharks. This awesome array of marine life is accented by a backdrop of lush soft corals, hard corals, anemones & huge gorgonians. You may want to capture some of Palau's underwater beauty on film with one of the on-board rental cameras. With the on-board digital photo lab, divers may view their pix just hours after they were shot. There is a full line of rental camera equipment & dive gear available throughout the week, as well as certification & specialty courses including nitrox certification.

Saturday afternoon, the Rock Island Aggressor returns to port. Guests may spend the afternoon shopping, sight seeing or just relaxing on-board until the evening cocktail party hosted by the crew. After the party, everyone will dine at a local restaurant. This is the only meal not included in the charter. Check-out is 8:00 a.m. Sunday morning. The crew will drive you to the Palau airport or a hotel if you are extending your vacation. Most dives in Palau are drift dives so guests should be experienced scuba divers.

Blue Corner:
The best known & most highly rated dive site in Micronesia features a shallow coral shelf that projects out into the ocean & has vertical walls on both sides. An upwelling created by the currents attracts schools of fish & large pelagics to the top edges of the walls. The dive is best known for its schools of gray reef sharks that cruise the edge of the wall. Two resident Napoleon wrasses often accompany the divers throughout their dive. Dogtooth tuna, eagle rays, manta rays, white tip & hammerhead sharks, turtles, schooling barracudas, & schools of reef fish populate the site.  This dive is one the true Palau diving classics, & a perennial favorite among skippers of Palau live-aboards.

Siaes Tunnel:
An extraordinary deep dive on the west side of the Palau, close to the Ulong Channel. The dive begins on a sheer wall with the opening of the tunnel starting at 70'. You enter through an opening, which is about 50' across & 20' high, & swim through the tunnel, which parallels the wall for 150'. The inside of the tunnel is a large cavern with a ceiling at 80-90' & the floor at 120-130'. Halfway through the tunnel is a "Window" in the wall that looks out onto the deep blue. You exit through a large opening on the wall at 80'. Stingrays, turtles, schools of jacks, & sharks can be seen in & around the tunnel.

Short Drop-Off:
A sloping wall just outside the entrance to Koror Harbor that is covered with giant seafans. The top of the wall is a beautiful coral garden loaded with tropical fish & invertebrates.  These dropoffs are also classic Palau dive trips. Another prime underwater classic for clients on a Palau live-aboard.

Big Drop-Off:
A wall dive that begins as shallow as 2' at low tide & drops to 600'. It is considered by most to be the most beautiful wall dive in Palau because of its abundance of hard & soft corals, seafans, schools of pyramid butterflyfish, & a multitude of tropical reef fish. Still another major treat you can enjoy from Palau live-aboards, but not easily from land-based diev charters.

New Drop-Off:
Halfway between Blue Corner & Big Drop-Off, this vertical wall is similar to Blue Corner in that it is a shallow shelf that juts out into the ocean, catching the current & creating an upwelling that attracts schools of pyramid butterflyfish & barracudas, along with a number of gray reef sharks. The steep wall is covered with soft corals & seafans. The action never stops on these primo Palau live-aboards!

Ulong Channel:
This channel is located on the west side of Palau, close to Siaes Tunnel & Wall. Its entrance is surrounded by walls that are topped by beautiful coral gardens. On the incoming tide, the mouth of the channel is filled with gray reef sharks. The channel extends for a distance of approximately one-half mile, averaging 100' in width. The maximum depth is about 60'. Coral covered walls run the length of the channel on either side. A shallow ridge running the center of the channel is blanketed with soft corals, hard corals, sea fans, & anemones. Unique to this site is a huge patch of plate coral resembling lettuce leaves that is home to schools of squirrelfish, soldierfish & glasseyes. The current provides a gentle push, resulting in a beautiful, leisurely ride along the channel. Yet another wondrous classic diving site for clients lucky enough to have a week on a Palau live-aboard.

German Channel:
This man-made channel through the southwest side of the barrier reef is home to two diving areas. One site, known as Manta Rock, is a natural cleaning station where giant manta rays come to have their bodies cleansed of parasites & debris by cleaner wrasses. Gray reef sharks also often avail themselves of the wrasses' services. The area is also inhabited by barracudas, snappers, titan triggerfish, gobies, lionfish, leaf fish, & an octopus. Nearby is a coral garden that features crocodile fish, nudibranchs, flatworms, anemones & clownfish. You need not be a German to enjoy Palau live-aboards, nor this site, mates!

Jellyfish Lake:
(Please check with USDT before your trip for the status of the lake. The government of Palau has closed the lake on occasion for environmental reasons.) This is the most unusual snorkeling spot in the world! After a short but breathtakingly beautiful climb along a forested trail, you snorkel in a clearwater lake filled with nearly two million jellyfish. Fissures in the limestone island allow for the transfer of saltwater from the ocean, yet keep other forms of aquatic life outside. Due to a lack of predators, the jellyfish have evolved to point where they have no ability to sting.  Imagine that -- zero stingers, & you can just swim among them like you are wallowing in a warm pool of translucent orange Jello blobs; it's incredible!  Palau dive tours are known for these forays to the famous Jellyfish Lake. This may be the most-requested classic site for any clients on Palau live-aboards, year after year. It's a beaut' folks!

Blue Holes:
This is a series of four large holes in the top of the reef that converge to form a gigantic underwater chamber. The chamber has a huge opening on a wall that is home to soft corals, sea fans, sea whips & hard corals. Large pelagics often encountered here include tuna, jacks, gray & white tip reef sharks, barracuda & eagle rays. Grouper, Napoleon wrasse, triggerfish, Moorish idols, butterflyfish, anemones & turtles are common at this site, which is situated next to Blue Corner. Not quite as huge as the Belizian Blue Hole, but this Palau live-aboard can deliver a great day dive here, no doubt.

Denges Passage:
This natural channel, situated on Palau's eastern coast, is home to an entire family of cuttlefish. The uncommon creatures, related to the squid family, are as accommodating to photographers as they are rare. They are not often encountered by divers because of the relatively few locations in the world where they can be found, their ability to remain relatively motionless, & their excellent camouflage.

Ngerchong:
The island of Ngerchong, just beyond Denges Passage has two dive sites nearby: Ngerchong Outside & Ngerchong Coral Gardens. Ngerchong Outside is a sloping wall dive featuring sea fans, anemones, soft corals & many hard coral formations. Sharks, bumphead parrotfish, & schooling fish are frequently seen here, as well as an occasional manta ray. The Coral Gardens, also known as Ngerchong Inside, is probably the best dive in Palau for seeing an abundance & variety of hard corals. Table coral, staghorn coral, elkhorn coral, mushroom coral & brain coral are just some of the varieties of corals found here. In addition, many anemones with clownfish, along with cuttlefish, turtles & other fish thrive here. This dive can be enjoyed at any depth between 10' & 80'. Now this is another wonderful adventure diving locale that this Palau live-aboard makes so easily accessible.

Peleliu:
The island of Peleliu, at the southern tip of the main archipelago of Palau, is bordered by magnificent walls. The dive sites include Peleliu Corner, Yellow Wall, & Orange Beach, among others. Peleliu dive sites are mainly steep walls covered with sea fans, sea whips, hard corals & anemones, but dominated by soft corals. Peleliu is an excellent place to observe large pelagic life, particularly sharks.  This is another splendid classic of Palau diving trips. Palau live-aboards can offer sites & sights galore, you will never forget a scuba diving locale like Peleliu. This Peleliu dive just plain rocks, amigos del mar.

Chandelier Caves:
A short swim through a tunnel at depth of 35' opens into a cave consisting of three chambers. Beautiful stalactites formed by water dripping down through the rock island above, hang from the ceilings & give the caves their name. Tiny holes to the outside wood allow fresh air to enter the chambers so that divers can surface & admire the beautiful surroundings.

Wreck of the Iro Maru:
A 145' long merchant ship sunk during World War II by American bombers, the Iro Maru sits upright in 120' of water just 10 minutes south of Koror. Three mast & gun turrets at the bow & stem support a large variety of invertebrates & hard corals. The main deck is at a depth of 80' with open holds containing oil drums & machinery. Compared to many of the Palau scuba diving sites offered by Palau Aggressor, this is a pretty advanced one, so be careful, friends.

Wonder Channel:
Located within the rock islands just a short distance from Jellyfish Lake & Clam City, this channel is best dived on the east side along a wall that starts at the surface & reaches a depth of 80'. Soft corals, sea fans, anemones, blue & red starfish, crown of thorns star-fish, crabs, pipefish, & a large variety of sea slugs, flat worms & nudibranchs can be found along this wall. Only on a world-class Palau live-aboard can you really appreciate this magnificent site!